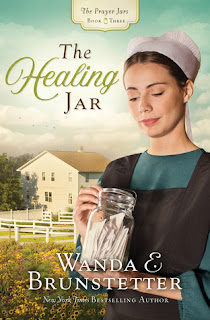 What if you have waited to find love only to be rejected when it finally comes?


Lenore Lapp is an Amish schoolteacher in her late twenties still living at home with her parents and grandparents. She thought love had passed her by until she meets Jesse Smucker, a widower with a baby daughter. She quickly falls in love with them both and accepts Jesse's proposal of marriage, but Jesse breaks off their engagement when he realizes he can't marry only for convenience.


Resigned to living single, Lenore throws herself into caring for her elders. While working in her grandmother's garden, she digs up an old jar. Will Lenore find healing for her broken heart and solve long-buried family secrets by reading the note contained inside?

I enjoyed this book. Even though this is the third book in this series and I didn't read the first two, all of the subplots and extra characters were explained well in this book and I didn't feel lost at all. If you have read the first two books in this series, then I HIGHLY recommend reading this book so you can catch up with previous characters and see how things end up for them.

There was a lot going on in this book and a lot of characters to follow and keep up with. Several times I found myself thinking that I'd put the book down when I finished the chapter I was on, however I had to keep reading to see what would happen!

I didn't really feel like there was much chemistry between Jesse and Lenore. I felt like Lenore just wanted to get married and liked the idea of being a mother to Cindy. I didn't really see her falling in love with Jesse. Jesse's thoughts made it clear that he wasn't in love with Cindy and I didn't see anything much in the story to dispute that, even though he supposedly just wasn't letting himself fall in love with her. There were so many other things that I enjoyed about the book that this didn't really take away from the story for me.

The thoughts of the characters were frequently written in italics which I thought was unusual but really connected me to the characters. I also liked that in one line a character would use a Pennsylvania Dutch word or phrase and then in the next line, it was made clear what that word or phrase was. Those were two aspects of the book I really liked.

If you like Amish fiction, I highly recommend this book!

I received a complimentary copy of this book from Barbour Publishing and was under no obligation to post a review. All thoughts and opinions are my own.