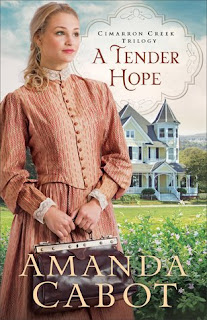 As far as Thea Michener is concerned, it's time for a change. With her husband murdered and her much-anticipated baby stillborn, there is nothing left for her in Ladreville. Having accepted a position as Cimarron Creek's midwife, she has no intention of remarrying. So when a handsome Texas Ranger appears on her doorstep with an abandoned baby, Thea isn't sure her heart can take it.

Ranger Jackson Guthrie isn't concerned only with the baby's welfare. He's been looking for Thea, convinced that her late husband was part of the gang that killed his brother. But it soon becomes clear that the situation is far more complicated than he anticipated - and he'll need Thea's help if he's ever to find the justice he seeks.

I enjoyed this book, however it was the mystery in it that kept me turning the pages rather than the romance. From the start of the book, Jackson is trying to catch some bandits and as these bandits commit another crime which proves that Thea is in danger, the tension mounts. It was interesting to read from Jackson's perspective as he talked about the challenges of life as a Texas Ranger.

It was cute to read how Jackson and his friend Nate both needed to learn how to court a woman. I thought Jackson and Thea's relationship moved at a believable pace (for the time period in which this book is set). It was also interesting to read the conclusion to a storyline from the previous books in the series about a mother who was forced to give her daughter up for adoption.

This is the third book in the Cimarron Creek trilogy, however it can be easily read as a standalone. It may make you want to go back and read books one and two to see how other couples mentioned in the book got together!

If you like historical Christian fiction, I recommend this book.