I am SUPER excited to welcome Karen Witemeyer to the blog today! I love Karen's books and her most recent release, More Than Meets the Eye, is now one of my all-time favorite reads. You can check out my review here. I think Karen has such a cheerful spirit wherever I see her on-line. Read on to hear more about that and to hear what else she has to say. :) 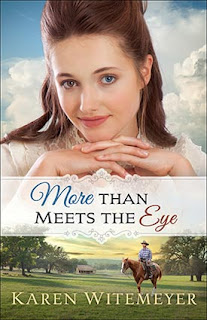 Many consider Evangeline Hamilton cursed. Orphaned at a young age and possessing a pair of mismatched eyes--one bright blue, the other dark brown--Eva has fought to find her way in a world that constantly rejects her. Yet the support of even one person can help overcome the world's judgments, and Eva has two--Seth and Zach, two former orphans she now counts as brothers.

Seeking justice against the man who stole his birthright and destroyed his family, Logan Fowler arrives in 1880s Pecan Gap, Texas, to confront Zach Hamilton, the hardened criminal responsible for his father's death. Only instead of finding a solitary ruthless gambler, he discovers a man not much older than himself with an unusual family. When Zach's sister, Evangeline, insists on dousing Logan with sunshine every time their paths cross, Logan finds his quest completely derailed. Who is truly responsible for his lost legacy, and will restoring the past satisfy if it means forfeiting a future with Evangeline?

What inspired you to write about a character with eyes that are two different colors?

Karen: The premise behind my new Patchwork Family series is a group of orphans who bond to form their own family when their orphan train derails. These youngsters were overlooked, discarded, and unwanted by the families they met along their journey. Zach, because he is a belligerent loner with a giant chip on his shoulder. Seth, because he is sickly, weakened by asthma. But how could I make my cheerful, tenderhearted Evangeline undesirable to adoptive families?

That's when I thought of cats. No, I wasn't going to give her claws. But what about mismatched eyes? Psychologists will tell you that at a subconscious level, humans crave symmetry. It's why certain faces are universally more attractive than others. When that symmetry is out of balance, it creates cognitive dissonance in the human brain. In our effort to explain away this discomfort, we place blame on the cause, calling it unnatural or even something darker like witchcraft. The greater the dissonance, the greater the reaction. So, I didn't simply give my heroine slightly different colored eyes, I made them drastically different. One dark brown and one vividly blue.

It's been fascinating to me to see how many readers have contacted me to let me know that either they themselves have heterochromia or that they know someone who does. It's a rare condition, and most cases are much more subtle than the what I gave to Evie, but I've loved hearing from people who have a connection with this condition.

I loved Evie's pet pig, Hezekiah! How did you decide on a pet pig for the story?

Karen: When I first envisioned Evie, I pictured her being one of those Snow White type characters who had a natural way with animals, one who would take in birds with broken wings or bunnies with paws that had been wounded in a snare. But birds and bunnies were too fairy-tale-ish. I wanted something original, an animal that most people would see as an ugly nuisance, leaving only a pure soul like Evie to see the beauty beneath the surface (one of the themes in the book). Feral hogs have long been the bane of Texas farmers and ranchers. Rooting up gardens, trampling seedlings, and gouging men with their dangerous tusks. People would rather shoot them than bring them home as a pet. Not Evie. When she finds an orphaned piglet, she doesn't care that it will grow up to be a nasty hog. Her heart immediately relates to the suffering of losing a parent and being left to fend for oneself. She brings him home, nurses him to health, and claims him as her pet. Her brothers aren't too fond of Hezzy, but they love their sister, so they find a way to make it work.

You always appear cheerful on social media. How do you balance a family, writing, and another job?

Karen: It makes my heart happy to hear that my demeanor comes across as cheerful on social media. I truly am a cheerful person. I love to laugh, appreciate the value of a good pun, and do my best to bring light and encouragement to those I interact with online as well as in person. That's the reason why I am drawn to lighthearted stories with elements of humor. I truly believe the wisdom in Proverbs 17:22 - A cheerful heart is good medicine, and I try to incorporate those elements into the stories I tell.

I must admit, though, that balancing family, writing, and a full-time job can be exhausting and stressful at times. Many days feel like there just aren't enough hours in the day. Yet, God never fails to see me through. Many times it is my interactions with those same people on social media that lift my spirits and give me new energy to face the tasks set before me. So thank you for being a blessing to me!

Do you have a favorite Bible verse or a verse that is particularly meaningful to you right now? If so, what is it and why is it meaningful?

Karen: There are two verses that I keep next to my computer where I see them every day as I write. The first I made into a mouse pad with a great antique book image. This reminds me of the purpose 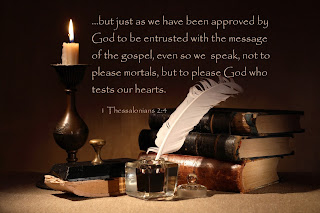 behind what I write. I write because God has called me to do so, and he's entrusted me with a message - his message - and that truth should infuse my pages. And while writers are often consumed with finding ways to please our readers in order to garner favorable reviews, sell more copies, and create positive buzz, this verse reminds me that while having the reader in mind is important, it's not the reader I am ultimately called to please. I'm called to please God. Focusing on gaining earthly praise lends itself to pride and envy. Focusing on pleasing God leads to humility, a teachable spirit, and an open heart. I don't always walk the higher ground, but this verse reminds me to get back on track when I stray.

The other verse I keep close at hand ties into this last idea. It's from Psalm 115:1 - Not to us, Lord, not to us but to your name be the glory. I readily admit that pride is something I've struggled with most of my life. I've always been an achiever. Straight A student, master rule follower, people pleaser. So as my writing began to take off, I needed the reminder that it's not about me. My achievements. My glory. It's about the God I serve and honoring him through faithful obedience.

Is there anything you were hoping readers would be inspired by or take away from More Than Meets the Eye?

Karen: In More Than Meets the Eye, Evangeline experiences rejection and prejudice because of her mismatched eyes, yet the love of her two adoptive brothers sustains her and helps her battle despair. Yet because it is easier to avoid conflict than face it head-on, she isolates herself on her homestead instead of venturing into town. Until she encounters a newcomer named Logan who, while carrying his own secret agenda, nevertheless treats her like a normal woman, appearing to be completely unaffected by her eyes. Logan challenges her to overcome her fear of what others might say or think and stand tall in a world that fails to appreciate inner beauty because they are blinded by what is on the outside.

Our Lord came to bring hope to the outcast, to adopt the unwanted into His family and to turn shame into glorious victory. For readers who are buffeted by ostracism and seeking a place to belong, my prayer is that they find hope in this story and gain the courage to reach out to friends and family for support. That they come to see their value in being a child of God and cease believing the lies of shame hurled at them by the world. For readers blessed with a healthy self-esteem, my prayer is that their eyes will be opened to the Evangelines in their own lives. That they will be encouraged to reach out in kindness and friendship, perhaps becoming an anchor for a lost soul in danger of drifting away.

What are you planning next?

Karen: I'm currently working on a story for Evangeline's big brother, Zach. So far, readers have been pretty unanimous in their feelings about this tough-on-the-outside, gooey-on-the-inside character. Like me, they've fallen a little bit in love with him and are clamoring for his happy ending. I, of course, am thrilled to oblige. Zach is going to meet his match in an independent bakery owner with a spirit as sweet as the sticky buns he purchases in her shop for breakfast every morning. This will be my first plus-sized heroine, and I'm excited to pair her with such a hunky hero.

Where can we find you on social media?

Karen: The best place to connect with me on social media is on Facebook. I have a special group set up just for fans called The Posse. We talk about books but we also brainstorm ideas for upcoming projects, do a handmade ornament exchange at Christmas time, and through the summer, we are doing a weekly color page where we meditate on a Bible verse and color then share pictures of our finished products at the end of the week as well as sharing what the Bible verse spoke into our lives.

Thank you so much for taking the time to visit with us today! I am already looking forward to the story of Zach and the bakery owner.

More Than Meets the Eye ~ "Captured my heart from the start . . . easily the best inspirational romance I have read in years." - All About Romance

Heart on the Line ~ "A captivating, enjoyable book filled with adventure, wit, and whimsy." - All About Romance

Email ThisBlogThis!Share to TwitterShare to FacebookShare to Pinterest
Labels: Interviews