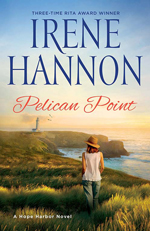 A crumbling lighthouse is not part of the inheritance Army doctor Ben Garrison expects to claim when he journeys to Hope Harbor. Fresh out of the service, he wants only to unload the tower of bricks, decompress from years of treating battlefield trauma, and prepare to launch his civilian career. Hope Harbor Herald editor Marci Weber has other ideas. She may not be a Hope Harbor native, but the small Oregon seaside town has become home—and she’s determined to save the Pelican Point landmark. Sparks fly as the two go head to head over the fate of the lighthouse. But when they start to cooperate, a different kind of fire ignites. Can Hope Harbor heal the hearts of these two romance-wary souls?

I really enjoyed this book! Prior to this book, I had only read romantic suspense by Irene Hannon (which I really enjoyed), so I was excited about giving her contemporary romance a try. I wasn't disappointed! I have a friend who has been enjoying this series so I was pretty sure I was safe with this book. :) This is the fourth book in Irene Hannon's Hope Harbor series however I haven't read any of the previous books and I had no trouble reading this book as a stand alone.

I was laughing out loud in the first chapter when Ben tried to rescue a cat he thought was stuck in a tree.

In the beginning, it was Rachel and Greg's story that kept me turning the pages. These two are essentially newlyweds and Greg is dealing with the loss of his leg as a result of his military experience while Rachel is trying to uncover the man Greg was before the accident.

I felt like Marci and Ben's story picked up about halfway through the book. I liked that each of them had something from their past that they had to deal with. I liked the element of suspense that was woven in from Ben's past. I didn't like how quickly Marci and Ben's relationship developed and how quickly Ben was making a major life decision based on early attraction to Marci. At the end of the book, due to extenuating circumstances, Ben offers for Marci to sleep over in his guest room. I didn't like that scene being in a Christian novel just because I don't think that's a good idea in real life.

Charley is a neat character in the book. I kept wondering if he was an angel. He seems to know the right thing to say at just the right time about things that he seemingly shouldn't know anything about.

I love being inspired by Christian fiction! In this book there were many instances of characters praying about circumstances and decisions and that was a good reminder to me that I should be praying about everything.

If you like contemporary Christian fiction, I recommend this book.

I received a complimentary copy of this book from Revell. I was not required to write a positive review. All thoughts and opinions are my own.