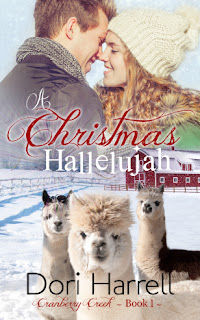 When her mom decides it’s time to “find herself” and takes off to points unknown, illustrator Piper Castleton is left in charge of her hurting, troubled teenage sister and the family’s alpaca ranch. Giving up her job in the city and returning to the farm is a no-brainer, but how is she supposed to raise her sister when all she wants is their mother back? And Christmas? That’s off the table.
Alex Saunders’s young son was diagnosed with severe separation anxiety disorder after his mother’s death a year and a half ago, and he hasn’t left Alex’s side in months. Alex is stretched too thin to even think about celebrating Christmas this year, so when his mom suggests they spend the holidays in Cranberry Creek, he cautiously agrees.
But when Piper and Alex meet, life takes a few unexpected turns. As a surprising and heartwarming friendship unfolds before their eyes, will Piper and Alex orchestrate a Christmas hallelujah out of the beautiful messes that are their lives?
My Thoughts
This book has everything I love in a book: great spiritual inspiration, a sweet love story, single parents, and animals! I found out about A Christmas Hallelujah by Dori Harrell when I saw it in a contest (which I sadly did not win). The alpacas on the cover caught my eye and when I discovered it was a Christian Christmas romance, I quickly bought the book.
I thought this was a great short novel! It is set on an alpaca farm with lots of alpaca facts sprinkled throughout the book. I've always liked llamas and alpacas so I loved learning something new about them. I also liked that the characters acknowledged "God things" throughout the book. The characters came together to hold a special event for foster families which allowed the families to meet the alpacas as well as receive hats that were knitted for them with yarn made from the alpaca fur. I loved that idea!
I liked Piper, the heroine. She gave up life as she knew it and her career to raise her teenage sister when their father passed away and their mother took off. Piper had such a good attitude about her situation.
Alex was a great hero. He'd made mistakes in his past, learned from them, and wanted to do the right thing now. He has an adorable, almost-four-year-old son who plays prominently in the story.
I am looking forward to the second book in this series!