I could barely put down Tackling the Fields by Janet W. Ferguson! This book is going on my keeper shelf! 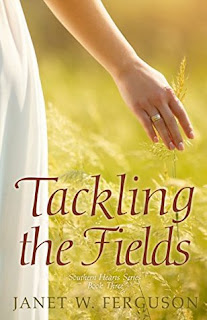 Tackling the Fields is the third book in Janet W. Ferguson's Southern Hearts series, but it can easily be read as a stand alone book. I enjoy books set in small towns where characters overlap between books and I was happy to visit with characters from previous books in the series.

This book appealed to me because of the "friends become something more" theme. The book went so much deeper than I anticipated. I have to say again that I could barely put this book down!

Audrey had been tutoring Cole, but their relationship changed when they went on a missions trip together. Cole wants to date Audrey but, due to some serious circumstances from her past, she is very reluctant to move past friendship with him.  Audrey's past continues to be an issue in her relationship with Cole and adds depth to this story. I think a very romantic part of the story is Cole's patience with Audrey.

Cole is a new Christian and he is trying very hard to do the right thing in his life and in his relationship with Audrey. We see Cole face some very realistic temptations from another young woman in their social circle as well as a health scare that jeopardizes his future football plans. Cole's football coach is a mentor to Cole and, at times, their conversations are comical.

I enjoyed the way the author put meaning to the phrase "tackling the fields" in the book.

This book dealt with some serious topics, but in a very thoughtful way.


From the Back of the Book

Cole Sanders is a changed man. The university quarterback questions his direction in life after serving on a mission trip in Honduras. Things that used to fill Cole's ego seem empty after witnessing the developing country's extreme poverty and the death of a precious child. The one glimmer of hope through his confusion is the fresh perspective he now has about his tutor, Audrey. She possesses something beautiful inside and out - something that might help him become the person he wants to be.

University senior Audrey Vaughn tutored Cole Sanders for an entire year and never imagined the popular quarterback would see her as anything more than a friend. After partnering with him on the mission trip, they are drawn together. And he appears to have changed for the better. To let Cole into her life, Audrey will have to overcome not only her brother's distrust, but also the paralyzing fear still lingering from a past she's tried to leave behind.

Cole can't walk away from Audrey now that they're back in Oxford. He'll have to figure out how to keep her giant of a brother, a lineman on his football team, from killing him when the coach has his back turned. But can Audrey trust her heart to a player to similar to the one who stole so much from her in the past?
Posted by Ellie at 12:50 PM