An Uncommon Courtship is another great book in the Hawthorne House series by Kristi Ann Hunter. 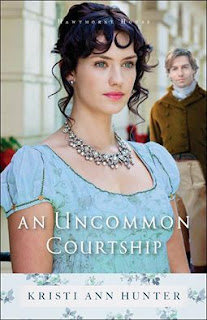 I liked both main characters, Adelaide and Trent, right away. I was cheering for Adelaide since she was raised by a mother who doted on her older sister and sometimes she was even forgotten and left behind by her mother and sister. Early in the book I was frustrated with Adelaide and wanted to tell her to just go talk to Trent - that a little communication in a relationship can go a long way. Eventually she figured that out. I appreciated how hard Trent worked to try to make their marriage work and how creative and thoughtful he was.

I just love the Hawthorne family! It was great to watch them rally together to support both Adelaide and Trent as individuals and as a couple.

This is the third book in the series, but can easily be read as a standalone novel.

I Loved This Line

"On her fifth birthday Adelaide got a pony. Her baby brother wasn't old enough to ride the estate with their father yet, but she was, and he took her out riding to every corner of the land he owned. She'd felt so important on that pony, one step below the queen herself. For the rest of her life she'd wished she could feel that way again. Tonight she did."1

I Was Inspired By

In the time period when this book takes place, if a man and a woman are together for a night without a chaperone, it's expected that they will marry in order to maintain their reputations in society. In the book, Trent and Adelaide are, through no fault of their own and innocently, alone together overnight and forced to marry to maintain their standing in society. This reminded me of I Thessalonians 5:22 "Abstain from all appearance of evil."

Trent and his older brother, Griffith, have discussions about trusting God in the situations they find themselves in. Things didn't work out they way Trent was hoping and planning, but he needed to trust God in the detour. This is a great reminder!

Lord Trent Hawthorne couldn't be happier he is not the duke in the family. Free to manage his small estate and take his time discovering the life he wants to lead, he has grand plans of someday wooing and falling in love with the woman of his choice. When he finds himself honor bound to marry a woman he barely knows, his dream of a loving marriage like his parents' seems lost forever.

Life for Lady Adelaide Bell was easier when she hid in her older sister's shadow - which worked until her sister got married. But even with her socially ambitious mother's focus entirely on her, the last thing she expected was a marriage of convenience before she's been introduced to society.

With nothing going as expected, can Trent and Adelaide's marriage of obligation survive their own missteps and the pressures of London society to grow into a true meeting of hears and minds?