This was the first book I read by Carrie Turansky and I am planning to read more of them soon! 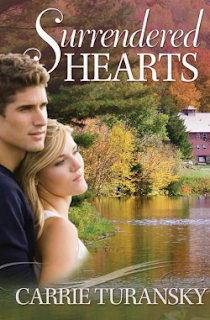 Surrendered Hearts by Carrie Turansky was everything I think a Christian fiction novel should be. There were strong spiritual themes throughout the book as well as a good story.

I was impressed with how realistic the Christian singles were portrayed in this book. Before getting married, I spent many years in Christian singles groups and I thought Carrie's descriptions of the situations and feelings of the characters were spot on.

I empathized with Jenn right away and which drew me into the book. Jenn hit rock bottom and sought out her brother, Wes, which was an answer to his prayers. Through Wes, Jenn met Bill, who, like Wes, had a strong faith. As Jenn and Bill began spending more time together, their feelings for each other grew. Jenn, who had years before abandoned her relationship with the Lord, was expecting a relationship to develop from these interactions while Bill was wrestling with his feelings for Jenn since she didn't share his faith. I thought the emotions felt by both characters seemed very realistic.

This is the second book in the series, but was easily read as a standalone.

I purchased a copy of this book (the e-version was free on Amazon at the time). I was not required to write a review. All thoughts and opinions are my own.

I Loved This Line

There were actually several quotes that I could use here, but this one really stuck with me. "Hey, beauty is more than perfect skin, or shiny hair, or a great figure. It comes from who you are inside, in your heart. It shines out through your eyes and your smile. And that's what touches people and draws them to you."1

I Was Inspired By

I was inspired by how Bill turned his feelings for Jenn over to God and trusted Him to make things turn out as they should. That's such a hard thing to do, in relationships or otherwise!

I was inspired by how Wes's fiance used her broken past to reach Jenn. Seeing someone use their past struggles to encourage someone is always amazing to me.

I was inspired by a situation in which Jenn put her jealousy in place and chose a right attitude instead.

Summary of the Book

A gas pipeline explosion and fire destroy Jennifer Evan's apartment and change her life forever. Not only does she lose her home and beloved dog, the ugly scars that cover her arm, neck and shoulder steal her confidence and cause her fiance to desert her. With her funds depleted and her job on hold, she heads for Vermont where she hopes to reconnect with her brother and find a way to rebuild her shattered life.

Bill Morgan, head naturalist at the Wild River Nature Center and her brother's roommate, is a strong quiet man whose faith runs deep. He and Jenn's brother determine to help Jenn make a new start in Vermont. Bill's stumbling attempts to share his faith with Jenn seem to fall flat and push her farther away, but she can see the difference his faith makes in his life, and her heart is still drawn to him. Will she hold on to the pain of her past, or will she surrender her heart and finally find the faith and love she longs for?