Review: Almost Like Being in Love by Beth K. Vogt

I really enjoyed Almost Like Being in Love by Beth K. Vogt. The story was good and I was inspired by this book on a spiritual level. 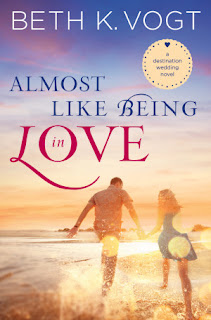 My thoughts: Caron Hollister, the main character, has always tried to win her father's approval. Caron is currently in a comfortable relationship with a long-time family friend, Alex, whom her father approves of. Caron makes a somewhat rash decision to leave her father's business and ends up temporarily working out of town for her ex-boyfriend, Kade, and she starts to question why, two years prior, she left Kade to stay in her father's good graces. While Caron is struggling with her feelings, Alex is starting to fall for a single mom. One thing that really stood out to me in this book is how well developed Alex's story is. Alex has serious family issues and we see him deal with those as we see Carol deal with the issues with her father. Caron wins a destination wedding, almost by accident, and that makes Caron and Alex examine their relationship. Is their friendship and history enough to build a future on?

I was inspired by Caron praying and listening for God and her willingness to be patient and wait for what He has for her. That's so hard to do in real life! A spiritual theme that carries throughout the book is that God's love for us is unconditional. As we watch Caron try to win her father's approval, we see her come to understand that she doesn't have to be anything that she's not to win her heavenly Father's approval.

From the back of the book: Winning a destination wedding would be a dream come true...if Caron Hollister and her boyfriend, Alex, were engaged. How is she supposed to break the news that she's won their dream wedding when he hasn't even proposed? Sure, everyone says they're perfect for each other. And he's likely to pop the question any minute. But will it really work if he can't even see why she likes the idea of a destination wedding?

Realtor Kade Webster has put his past heartbreak with Caron behind him. His thriving real estate company keeps him busy, and now he's secured a big win with the Colorado Tour of Homes. Then his home stager cancels, leaving him in the lurch...just as Caron shows up in his life once again. She can help him with the tour as long as they keep things purely professional.

Spending time helping Kade while she should be planning her dream destination wedding has Caron in knots. They broke up for good reasons, yet she's still embarrassingly attracted to him, even if he sometimes drives her crazy. How can she be feeling such things for one man when she's imagining a wedding with another? Can she say "I do" to one man when she's wondering "What if" about another?